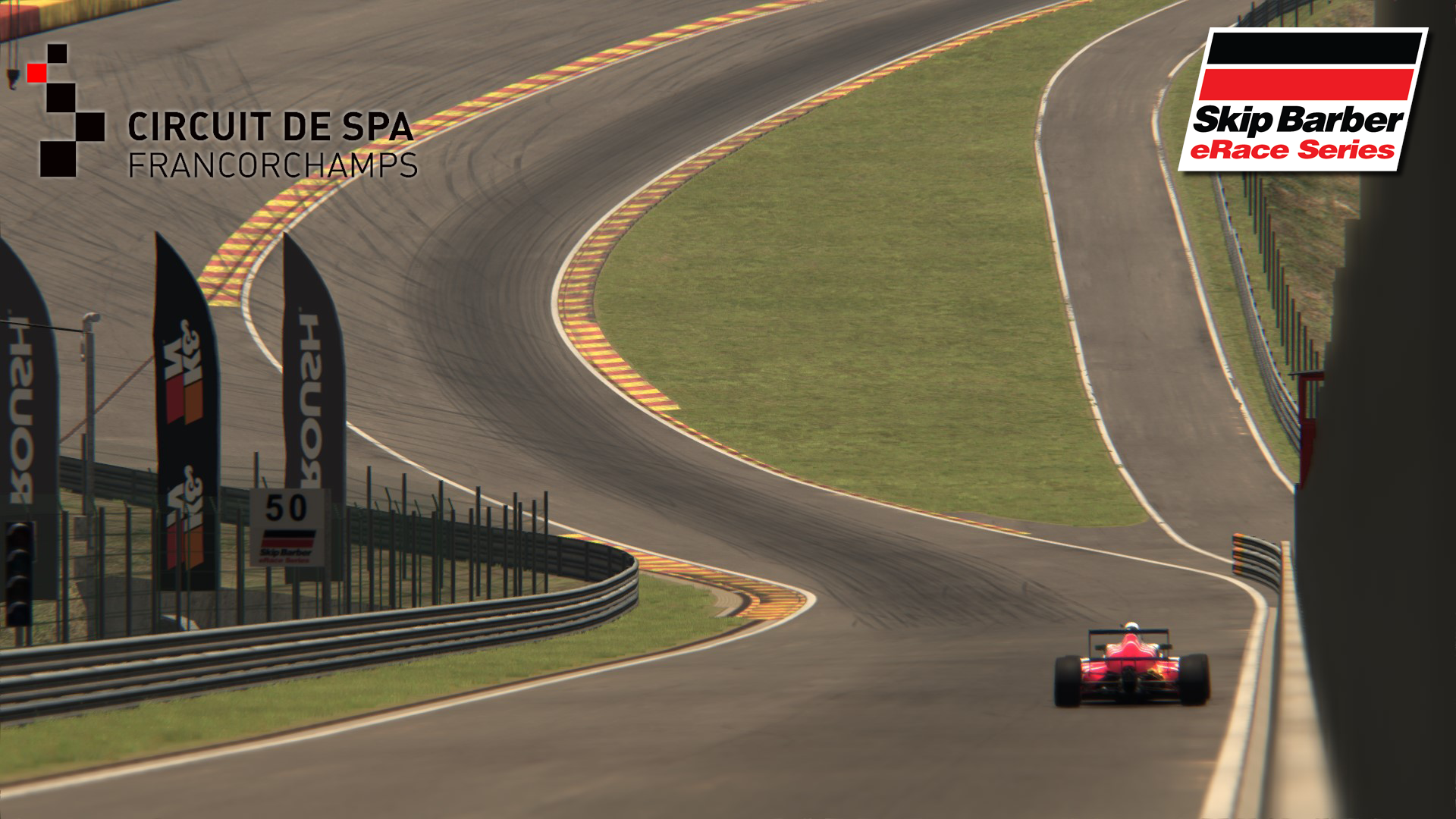 The excitement continued in a thrilling round of racing at Circuit de Spa-Francorchamps this weekend. The Skip Barber eRace Series headed to the home of the Formula One Belgian Grand Prix and was welcomed by beautiful May weather and a sold-out crowd!

The Hot Lap Qualifier for Round 2 saw 6 new drivers qualify for the race at Spa, highlighting the caliber of driver that the series has attracted. All drivers have their eyes set on the ultimate prize in motorsports: a season in the real-world Skip Barber Formula Race Series.

Heading in to Round 2, Championship leader Johnny Guindi set the fastest lap in the Hot Lap Qualifier. In typical Guindi fashion, on Race Day he set the fastest lap in qualifying and started Race 1 on the pole.  After a great start, Guindi lead the race from green to checkered, putting down an impressive 1:25:940 fastest lap and an 8 second lead on second place rival, Sven de Vries.

De Vries, third in the Championship headed in to Round 2, put on an impressive drive claiming his first podium finishing and took 2nd place in Race 1. Right behind de Vries, Series regular, Ed Kerstetter claimed 3rd.

The big question headed in to Race 2 was who could put pressure on Guindi. The answer happened to line up next to him on the grid: Sven de Vries. In pre-race interviews, de Vries stressed the importance of a good start. In what could have been mistaken for an NHRA drag race, Guindi and de Vries entered turn  two wide and stayed that way to Eau Rouge where de Vries was able to take the lead. With the pressure mounting from behind, Guindi fell back to third, and de Vries was able to increase his lead to over 2 seconds by lap 2. By lap 3, Guindi was able to reclaim second, but still had over a second and half to catch de Vries.

The Race 1 Hard Charger, Rory MacDuff, looked like he might make a run for the podium, making his way up to 4th, but a tough fighting Nathan Saxon would not relinquish his position – this helped Saxon claim the Race 2 Hard Charger Award battling to 4th from 12th.

The excitement at the front of the pack lasted until the last 2 laps. Sven de Vries held Guindi off until 2 laps to go. Swapping the lead several times, in the final lap Guindi put a move on de Vries and took his fourth win.

Round 3 Hot Lap Qualifiers were just announced, this we are headed to Brands Hatch for the Round 3 race weekend. The race will be broadcast on Skip Barber’s YouTube and Facebook pages at 3PM EST on Sunday, June 7th.

Want to join in on the action? The Hot Lap Qualifier for Round 4 at Silverstone Circuit is now open. Set your fastest lap to qualify to compete for over $500,000 in prizes. All Hot Lap entrants receive a $200 credit to Skip Barber Racing School! You can sign up at: https://bit.ly/3cvrS8g