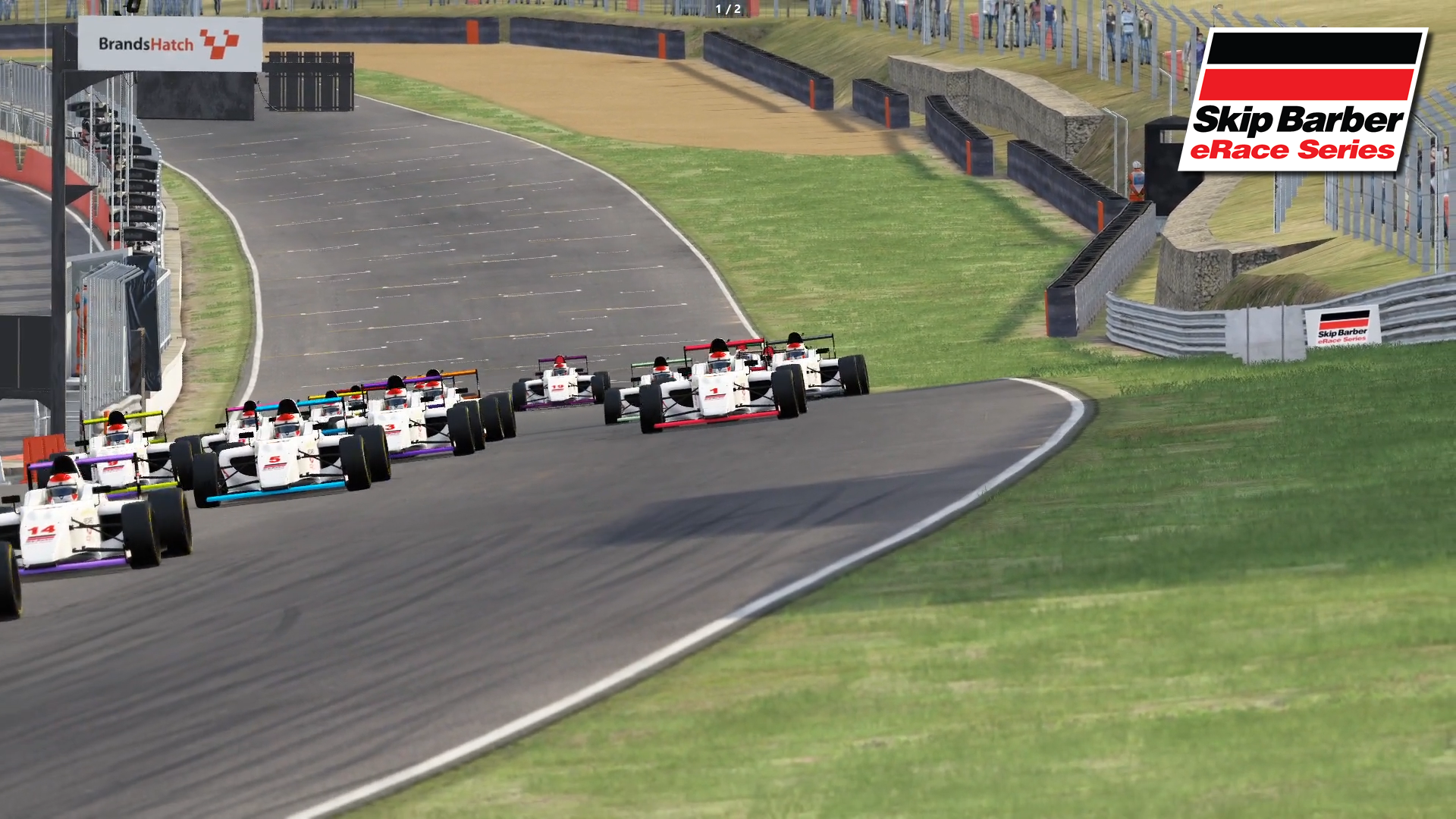 Round 3 of the Skip Barber eRace Series saw fierce competition, and the on-going dominance of one driver – Johnny Guindi. Dubbed the Lime Rock of Europe, Brands Hatch Indy offered up a different challenge for drivers requiring a differing strategy from Spa.

Leading the entire race, Johnny Guindi showed nerves of steel in Race 1, holding off pressure from Cadwalader and de Vries the entire 15-minute sprint race. The top 3 drivers in the Championship leading in to Round 3 pulled away from the pack and held on to the podium with Cadwaladar finishing right behind a Guindi, and de Vries behind him.

Nathan Saxon put his racecraft on display, forcing de Vries to protect his podium finish right up to the checkered flag. US Marine, Hunter Manley, showed what he is made of and claimed the Race 1 Hard Charger Award with an impressive performance moving up to 10th place from 20th.

The highlight going in to Race 2 was Cadwalader’s pace in Race 1, finishing 7/10ths behind Guindi – could he get around Guindi and put a claim 1st? Going in to turn 3, Gundi running wide, left the door open for Cadwalader and de Vries to get around, but closed the door just as fast and held his position. Lap 2 the gap between 1st and 3rd was less than half a second, but contact between Cadwalader and Sven de Vries would end their chances of claiming another podium.

Capitalizing on the error up ahead, the patience of Nathan Saxon and Freddy Gomez Jr would pay off, allowing them finish 2nd and 3rd respectively.

With Cadawalder and de Vries far in his rearview mirror, Guindi was able to drive off into the sunset claiming his 6th straight win. The most exciting action happened towards the back of the grid. Series regular, Sebastian Cedeno Schettini, a Skip Barber graduate, drove from 20th place to 8th, crowning him the Hard Charger of Race 2.

At the end of three rounds, Johnny Guindi sits in first in the Championship with 210 points, Thomas Cadwalader is in second with 170 points and Nathan Saxon is in third with 166 points. Sven de Vries is just 2 points out of third with 164 points.

Next week we are staying in Europe and heading to the home of British Motor Racing – Silverstone. Want to join the competition? You can sign up at skipbarber.com/erace-series!