For Round 4 of the Skip Barber eRace Series we stayed in the United Kingdom and headed to another iconic Formula 1 venue, Silverstone Circuit. Providing a different challenge than the short, sub 1-minute lap times of Brands Hatch Indy, Silverstone provided high paced thrilling action as competitors battled for championship points towards the ultimate prize in motorsports: a season in the Skip Barber Formula Race Series.

As drivers need to qualify each week, Round 4 saw some new drivers including 13 year-old Dean Dybdahl, a go kart racer who recently won the WKA Junior Enduro race at Daytona and has done most of his sim racing in iRacing. Registration for the Round 6 qualifier is now open at Skipbarber.com.

The headlines heading in to Round 4 all centered around one driver: Johnny Guindi. Through 3 Rounds of racing, Guindi has emerged as series favorite, remaining undefeated through relentless attacks from Thomas Cadwalader, Sven de Vries and Nathon Saxon. 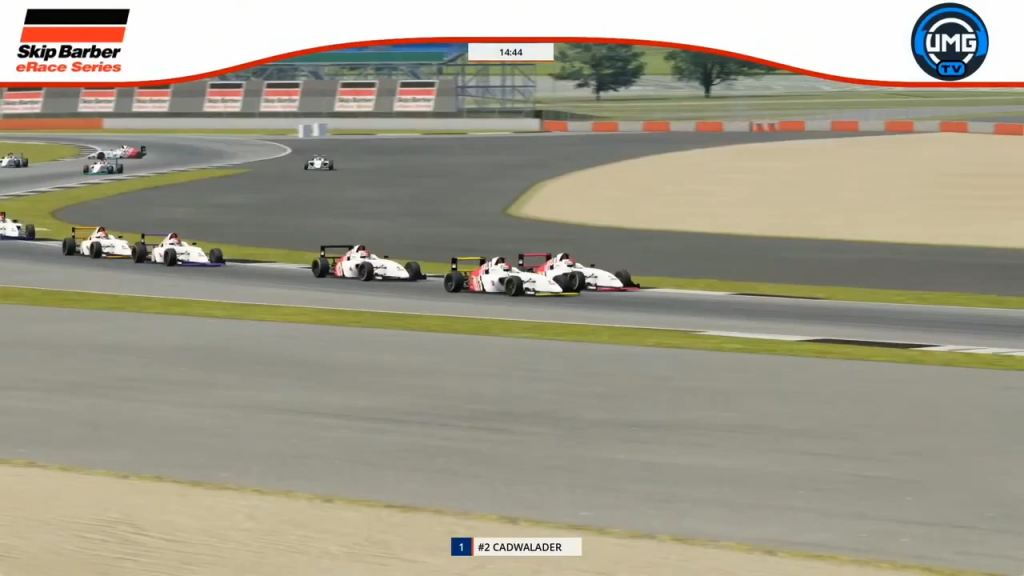 Race 1, Guindi was able to secure the pole with a blazing 2:03.948 in the qualifying session. Cadwalader and de Vries took the number 2 and 3 positions, respectively. Through the first lap, Cadwalader set himself up right in the draft of Guindi, de Vries fell back to fourth with Josh Jablonski able to make his way up to third – but a slick move by de Vries help him reclaim third.

At the mid-point of the race, Guindi, Cadwalader and de Vries had pulled themselves away from the pack. The excitement moved to the 4th place battle: Josh Jablonski and Nathan Saxon traded places several times in a great spectacle of racecraft, with Saxon coming out on top.

As the cars cross the finish line, a familiar group claimed the podium: Guindi, Cadwalader and de Vries with Nathan Saxon holding fourth. 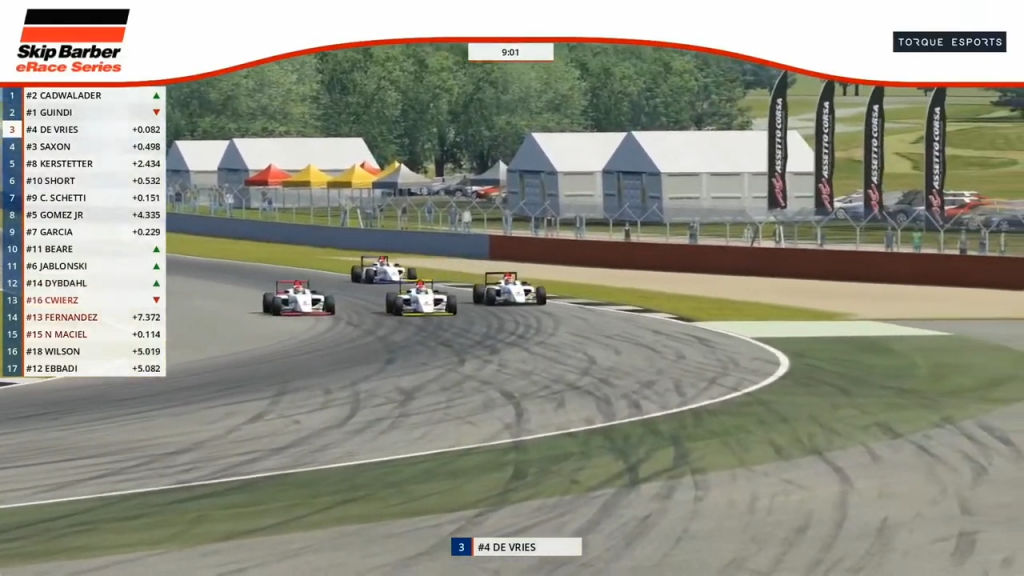 Cadwalader must have called John Force between Race 1 and Race 2, as an impeccable start helped him claim the lead in to turn 1. Cadwalader held off numerous attempts by Guindi, while de Vries sat just behind the action waiting to make his move. Lap 3 saw Guindi take the lead from Cadwalader, but the gap between first to third stayed under 1 second with the top 3 drivers going 3 wide several times. Eventually the pressure would overcome the grip in Cadwalader’s tires, as he found the grass, giving de Vries the ability to claim the lead with Nathan Saxon seizing the opportunity to take second and put Guindi right behind him in third. Heading in to the final corner, the order remained de Vries, Saxon. Guindi but in a drag race to the finish, Guindi was able steal second place from Saxon in a last moment push with de Vries claiming his first win in the Series.

Race 2 featured exciting racing all the way through the pack. Series regular, Ed Kerstetter was able to claim the Hard Charger award with an impressive performance moving up to 4th place from a 10th position start. 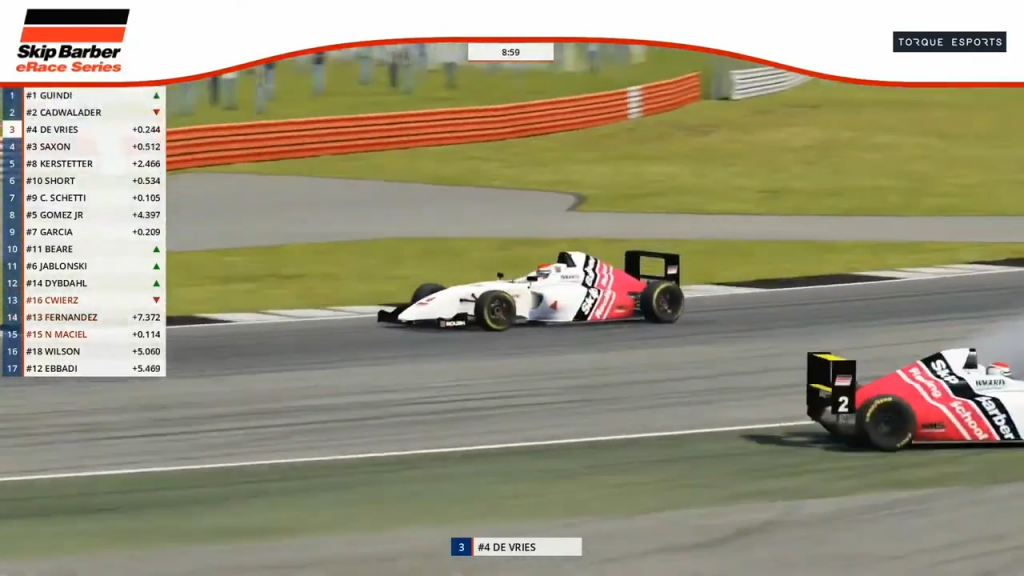 With Round 4 closing out the first half of the series, the action packed racing is a great indication of the battles the remainder of the season will offer. De Vries and Cadawalader have been nipping at the heels of Guindi, will he be able to keep calm and collected at Road Atlanta in Round 5?

After 4 rounds of racing, Johnny Guindi holds 1st place in the championship with 277 points. With this win, Sven de Vries jumped up to second place with 229 points, Cadwalader is right behind with 226 points. The driver to watch is Nathan Saxon, who sits in fourth place with 224 points. 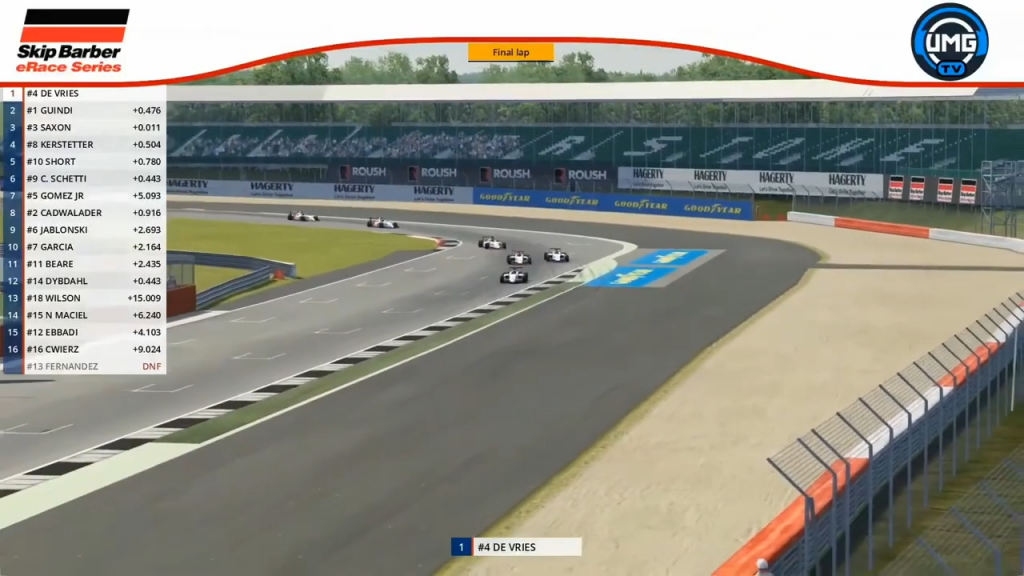 The Series returns to North America this week, with Round 5 taking place at the home of the Petit Le Mans, Road Atlanta. Be sure to tune in Sunday at 3PM PST to catch the action!

Want to join in on the racing? You can sign up for the Round 6 Hot Lap Qualifier at Monza now! See if you have what it takes to compete for over $500,000 in prizes! Sign up at Skipbarber.com/erace-series.