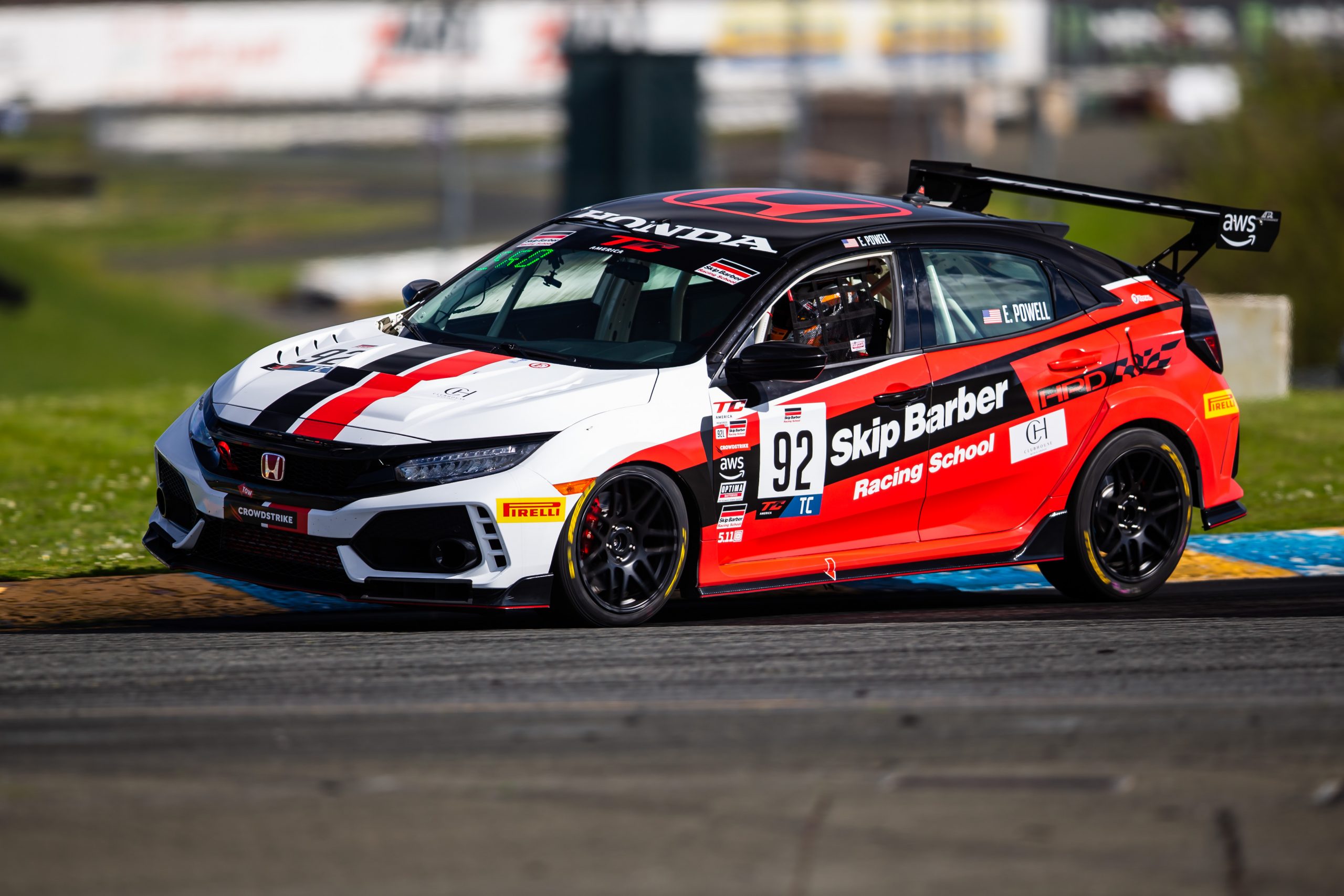 Sonoma, Calif – Despite a late-race caution that cut down a 30 second lead, Jacob Ruud and the #81 Classic BMW M2 CS Cup would cruise to the TCX and overall victory in TC America’s season-opening round at Sonoma Raceway. “I think we have a strong car for the season,” said race-winner Ruud, “I was able to save my tires today, so I was still comfortable during the late caution and was able to pull it out, it’s great to get this first win.” Ruud also ran the fastest lap of the race with a 1:51.157, giving him pole for Sunday’s Race 2.

As the green flag flew pole-sitting Ruud and the #81 BMW led the TC America presented by Skip Barber Racing School field and jumped out to a lead of nearly 2 seconds by the end of the opening lap over teammate Tommy McCarthy in the #27 machine.

TC class leader Eric Powell and the #92 Skip Barber Racing School Honda Civic Type-R would put the hammer down at the start and by lap two would move to third overall by putting a TCX-class machine between himself and rival Kevin Boehm in the #9 DXDT Honda Civic Type-R.

Ten minutes into the race, the #27 BMW of McCarthy would spin out of second position overall at turn 6, allowing Ruud to extend his lead and Roy Block in the #5 KMW Motorsports with TMR Engineering BMW M2 CS Cup to slip into second position in class.

McCarthy would quickly recover and get past Block three laps later.

As Powell and Boehm controlled the top two positions in TC, the battle for the final podium position raged on as Victor Gonzalez in the #8 VGMC Honda Civic Type-R, Toby Grahovec in the #26 BMW, and Rob Hines in the #21 Nissan battled at the halfway point of the 40-minute race.

With 16 minutes left on the clock, Gonzalez and Grahovec would rub together at the turn 9 chicane, sending Gonzalez into the wall, bringing out the first and only safety car of the race.

This safety car would give McCarthy new life as Ruud’s TCX-class and overall lead would be slashed from over 30 seconds as the field bunched together. The grid would get back to green flag racing with just over five minutes remaining, making the restart critical.

Ruud would remain leading over McCarthy in TCX, but Boehm would get the jump on Powell for the TC-class lead with Grahovec slotting into third and Hines fourth in class.

On the white flag lap however, Powell would place his car next to Boehm on the outside of turn 1, setting himself for the inside of turn 2, taking the lead in one sweeping pass. Boehm would hesitate with Grahovec then pouncing and take second position in TC. Rob Hines would finish fourth with Tom Capizzi and the #52 Auto Technic BMW M240iR fifth in TC.

The TCA battle would see pole-sitter Jesse Love and the #22 TechSport Racing Toyota 86 claim a narrow victory over the #61 MINI JCW Team Mini Cooper of Mark Pombo by one-tenth of a second. Caleb Bacon and the #18 Forbush Performance Hyundai Veloster Turbo would take the final TCA podium position.