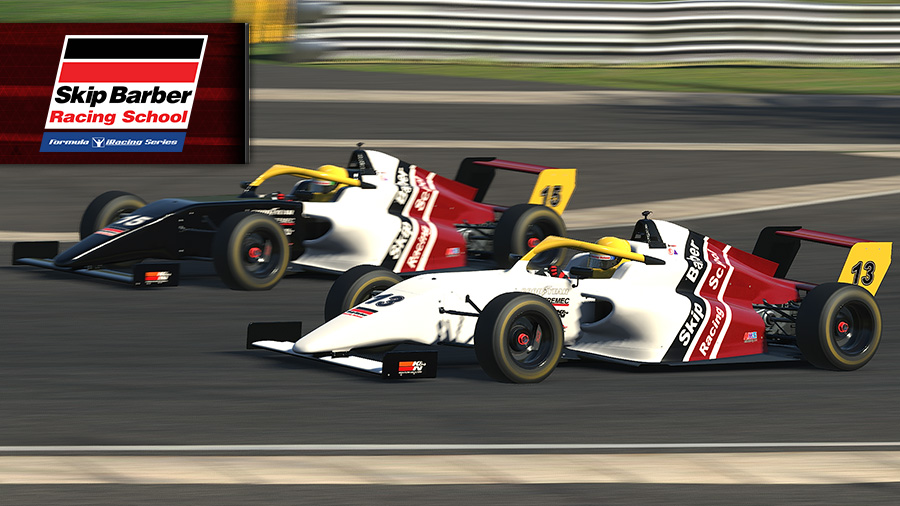 eNASCAR Coca-Cola iRacing Series veteran Matt Bussa took the first checkered flag at WeatherTech Raceway Laguna Seca, and three-time series winner Mikkel Gade returned to the top step of the podium for his fourth, as the Skip Barber Formula iRacing Series kicked off the second half of its 2022 season on Sunday afternoon.

Bussa posted the top qualifying lap prior to the first race and never looked back from there, scoring his first win of the season even as Gade set the fastest lap of the race on the final lap while pressuring him. For the Illinois native, the win was the biggest payoff from running all four events so far; while he also qualified fastest last week at Watkins Glen, his best finish thus far had been a fifth place run in the second feature at VIRginia International Raceway.

That meant that Bussa would retain the top spot for the second race, where he would lead the first two laps before the pressure from Gade and Elvis Rankin proved to be too much. Gade set up what would turn out to be the winning pass by running on the outside of the Andretti Hairpin, establishing the inside line for the subsequent corner and leading the final nine laps of the race from there. Unfortunately for Bussa, he would get caught up in an incident with multiple other cars a few laps later and take a DNF, opening up the final podium spot for Nicolas Mateo.

The Skip Barber Formula iRacing Series season continues next week with a visit to Road America, with Time Attack qualifying open now and the race airing on Sunday at 3PM ET. Sign up for this week’s qualifier by clicking here. For more information on the Skip Barber Racing School, visit www.skipbarber.com. For more information on iRacing and for special offers, visit www.iracing.com.