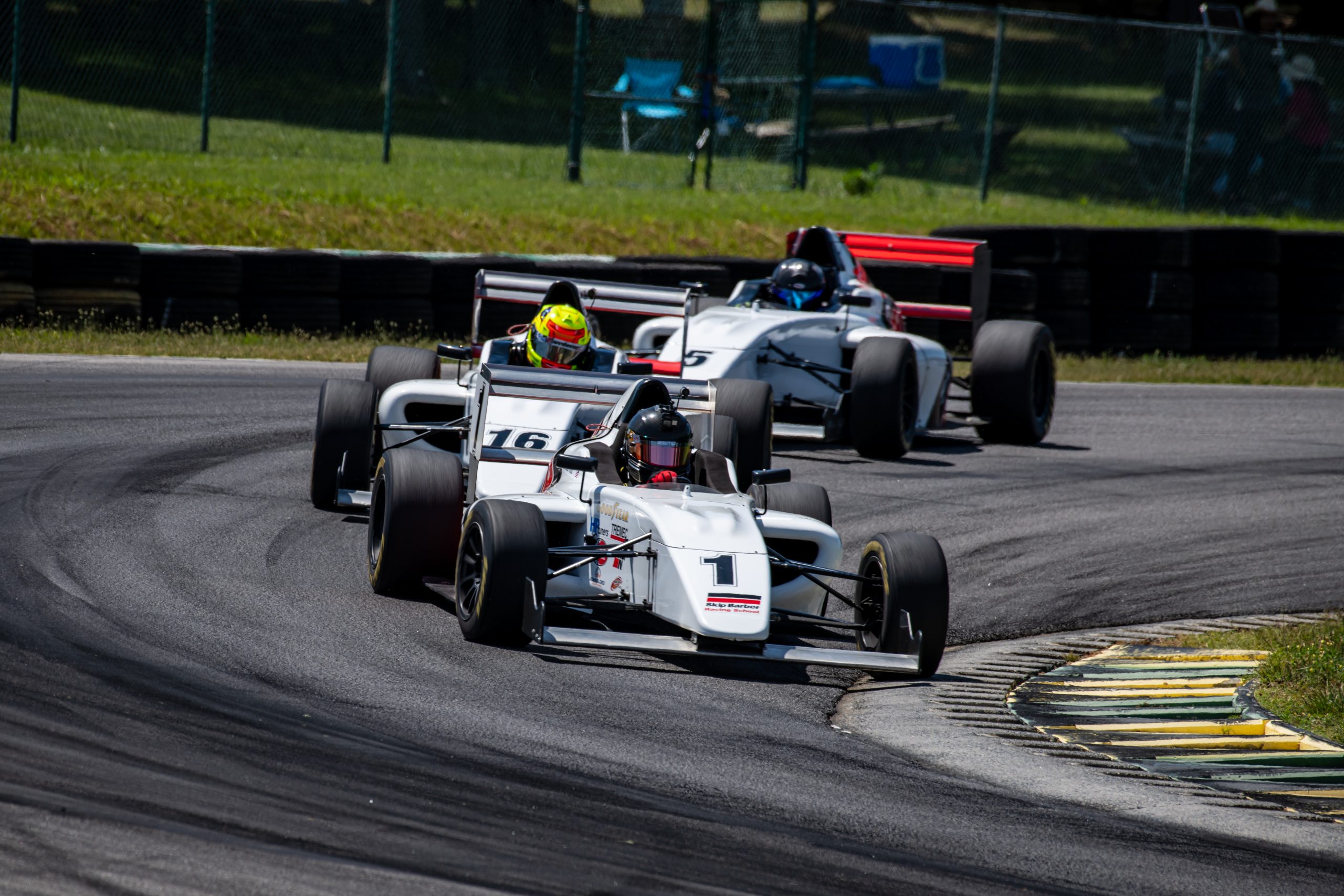 The Skip Barber Formula Race Series returned to action this past weekend at VIRginia International Raceway for Round 2. Although sharing the track with SRO America, the talented Skip Barber Formula racers put on a fantastic show on the 3.27-mile natural terrain road course.

In addition to the technical track to be learned, the drivers also faced the warmest and most humid weekend conditions on Friday’s practice day. Six different drivers took to the Top 3 spots in both practice sessions but were dominated by sim racing scholarship winners. 2020 Skip Barber eRace Series Champion and 2-Time Skip Barber Formula Race Series Champion Johnny Guindi proved his pace early by setting the fastest lap in Practice 1 with a 2:03.841. Joining Guindi in the Top 3 was last year’s Vice-Champion Jeshua Alianell and this year’s Skip Barber Formula iRacing Champion Mikkel Gade. As the drivers began to learn the track, the lap times began to decrease as the points leader leaving Lime Rock Park, Elvis Rankin, put down the fastest lap in Practice 2 with a 2:02.930. Will Lambros and Bobby Krug finished second and third, respectively, running lap times in the 2:04s. Saturday morning’s qualifying was tightly contested as the Top 3 placed within 4 tenths of each other, but it would be Alianell who bested Guindi for the pole position. 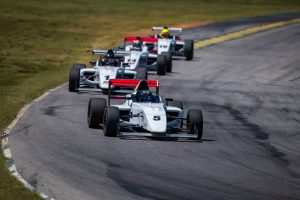 The weekend’s first race started with a three-wide lunge into Turn 1, which saw polesitter Alianell maintain his position and lead the field. Due to VIR’s long straightaways, drafting became a big part of the race as drivers would make 2-wide and even 3-wide moves at the end of the front and back straightaways. Unfortunately, after a 3-wide move in Turn 1, Guindi and Rankin made contact which ended both of their races. Alianell led the restart with Lambros and Gade in tow but held off second-place finisher Lambros to claim his first win of the 2022 season. The final step on the podium went to Krug as he passed Gade in the final laps. Rocco Orlando picked up his first win in the Master’s division, while debut racer Edgar White finished runner-up.

Starting order for Race 2 starting order was determined by the fastest lap time set in Race 1, placing Alianell back on the pole position again with Krug to his outside. Like a repeat of Race One, Alianell was able to hold the advantage over the field and began to pull away from the field. Meanwhile, Rankin began to carve his way through the field, from fifth to second in a matter of laps. Within the closing laps, Rankin had reeled in Alianell and tried finding a way around but couldn’t complete the pass, allowing the rest of the field to gain on the Top 2. On the final lap, Alianell and Rankin slid wide in Turn 14, putting Rankin off-track and slowing Alianell down. Krug made his way around Rankin and drag-raced Alianell to the line. Krug would beat Alianell to the line by 0.038, claiming his first-ever win in the Skip Barber Formula Race Series. Orlando would sweep the Master’s division, with White finishing in the second-place spot again.

After the first two rounds of the Skip Barber Race Series, Alianell takes over the top spot from Rankin with 129 points. Krug also moves up, trailing Alianell by only 9 points. Rankin, Gade, and Will Lambros round out the Top 5 in the points standings. In the Master’s division, Orlando takes over the top spot from Jimmy Dai. Orlando leads White by 51 points. Dai and Bob Perlmutter round out the points in the Master’s division. Check out the rest of the points standings by clicking here, and learn more about the Skip Barber Race Series by clicking here.